The original Point Break is one of my favorite movies ever. So it is needless to say that I was not thrilled when I heard they were recycling the idea for yet another rebooting, remaking or retooling. For the last year, I had totally forgotten it was being remade until it moved its release date to Christmas. Now, today is the day where the Point Break trailer comes out and it destroys all negative opinions I had on it going in and I was ready to hopefully see something that looked promising. However, the trailer was nothing special and just a slightly above average trailer that would probably have slipped my mind by now if it wasn't titled Point Break.

I liked much more of the trailer than I thought I would going in. In fact, I kind of like the trailer except for some moments where I absolutely hated it. Anyway, we start up, right off the bat, with an ancient proverb that states, "There are some who do not fear death, for they are more afraid of not really living". That is a GREAT introduction to the trailer. It sets up, right away, what Bodhi and his gang are all about. We then get a visually stunning airplane heist that was also amazing. I am a sucker for heist movies and when I saw this, I became very optimistic to what this remake could be. So far, so great for this trailer. Then, it lost me.

The first "uh-oh" moment for me was the shot of Johnny Utah presenting a video with a motorcycle stuntman in the background to a boardroom of people. For me, I found that laughable but they took it straight up seriously. The first Point Break is so great because it knows what it is. It doesn't take itself seriously but it has a perfect mixture of cheesiness and actual good cinema. Anyway, I shook off that motorcycle thing and let it slide. I loved the line, "they aren't normal people". Again, Bodhi and his crew are insane people with insane motives and that needs to be played up.

We get some cool shots of Utah walking and our first quick shot at Bodhi holding a gun. And then there was another "uh-oh" moment. Johnny Utah says "I believe that, like me, the people behind these robberies are extreme athletes". Now, I don't really care that they changed Johnny Utah into an extreme athlete instead of former Ohio State Quarterback, but I don't understand how you can say "extreme athletes" are behind the robberies and maintain a serious tone. Maybe the movie has a moment after that line where people make fun of Johnny for that theory but I wish that was conveyed in this trailer.

More stunts are shown off, this time snowboarding stunts which is pretty cool looking. We also learn that Bodhi and his team are disrupting the financial market. I like that because that is the same idea that the original had just done differently this time so I am totally on board with that. A change to the original is that "...they don't care who gets hurt in the process". The Ex-Presidents always tried to never hurt anybody in the original but they are ignoring that moral in this remake, which I am okay with just because it doesn't really matter. It is, however, a change to the Bodhi we all know and love because that moral was a big part of his character so this makes me believe that the new Bodhi will almost be completely different.

We get some classic shots of Bodhi and Johnny partying and hanging out, doing extreme stunts, and bonding which is all pretty familiar and I liked seeing. Then FINALLY, we see some surfing in a movie called POINT BREAK. If surfing isn't a major part of the movie, it shouldn't be called Point Break but I am glad that the waves got some attention at multiple parts of the trailer. I'm guessing it was used so prominently due to reports there would be no surfing at all in the new remake. Johnny is then brought in on Bodhi's plan to steal (or "liberate") billions of dollars of gold. This could be interesting to see if Johnny will actually rob the gold with them willingly because in the original, he only helped them by force. But who knows, maybe Johnny is being forced to help in that scene. 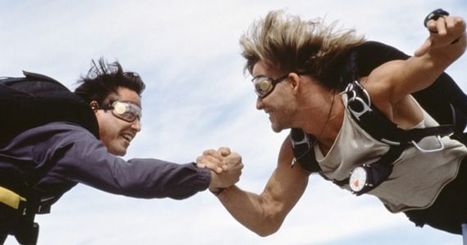 Then, we get the very CGI rock slide that some character (Johnny?) is miraculously getting away from. Whatever. I love the classic bro-hand shake that Utah and Bodhi have like the classic moment they had in the original (seen above). We then get more and more cool stunts but I still find it too serious. It may just be the trailer (like how Avengers: Age of Ultron had a tone-heavy trailer but the movie wasn't very serious) but I don't like the tone they're setting up.

This shot was a big standout for me. It confirms that Bodhi and his group will be a variation of the Ex-Presidents, which I wish they didn't really go into but I feel like if they were going to do it, this is the best way to do it because the masks would not fit the tone of this movie AT ALL. We then get really cool shots of sky gliding. And then we get the money shot of the trailer.

This may be the ONLY way they could top the skydiving with no parachute scene from the original. I have NO IDEA how they survive this but that shot alone makes me want to actually see the movie. It is visually stunning and an incredible cliffhanger (LITERALLY) and I love it so much. Overall, the Point Break remake trailer isn't terrible but it doesn't look great. I like some things they are doing but I feel like the tone is a bit ridiculous and could take me out of the movie.

2.5/5 Stars
Conclusion: While Point Break certainly won't live up to the 1991 original, it has the chance to be a worthy successor to a longtime favorite. While some moments are none other than spectacle, perhaps they can improve in some areas.